Adam was recently interviewed and featured in the book Audio Mastering: The Artists. Written by Russ Hepworth-Sawyer and Jay Hodgson and released via Routledge publishing, the book covers interviews with mastering engineers from all over the world. Check it out here. Adam was recently profiled for the Manley Labs website! He has been using Manley gear in his mastering chain for his entire career, and was thrilled to be included in their profile section. See it here. Adam was recently interviewed for the University of Southern Maine’s website. He has been adjunct faculty at USM’s School of Music for over 18 years now, and was interviewed by former student Kathryn Letellier. Check it out here. Adam and Bob Ludwig were recently interviewed by the Portland Press Herald ahead of their Maine Voices Live session at One Longfellow Square. Check it out here. Adam and Gateway Mastering got a great mention in the March 2016 issue of Mix Magazine. The Mix Regional/New England column gave a nod to some of the work Adam has done recently with Bruce Springsteen & the E Street Band, Ace Frehley, Edward Sharpe and the Magnetic Zeros, and Mavis Staples. Check it out here.

Adam was recently interviewed for Electronic Musician magazine! He was interviewed by Sarah Jones for her “Five Questions” column. It ran on the back page (!) of the January 2016 issue, and can now be found online here.

Adam was interviewed for Electronic Musicians’ “Rockstar Holiday Gift Guide.” It appeared in the November 2015 issue, and can be read online here.

Adam was recently interviewed for Jonathan Roye’s MixNotes Blog. Check it out here.

Adam Ayan & Bob Ludwig were interviewed for the January/February 2015 issue of Old Port Magazine. They discuss why Gateway Mastering Studios and the city of Portland are similar, and why they enjoy being in Portland, Maine. 57th annual Grammy nominations have been announced – Adam has 4 projects with a total of 5 nominations! They are as follows:

Carrie Underwood – “Something In The Water” – Best Country Solo Performance

Portland’s NBC affiliate WCSH-6 ran a great interview with Adam on their nightly show “207“. Check it out here.

The Portland Press Herald recently shot a Kimball & Keyser video profile with Adam and posted it on their website, Check it out here.

Adam was recently interviewed by the University of Southern Maine’s “The Free Press” about his mastering career, as well as Topics in Music Technology, the class he has taught at USM’s School Of Music for 13 years to date. Check it out here: USM Gets a Grammy Grade Education

Adam contributed an essay to the newly released Hal Leonard publication “Less Noise More Soul: The Search for Balance in the Art, Technology, and Commerce of Music“. Edited by David Flitner. Adam is featured on iZotope’s website for their “Stories From A Pro“ series.

Adam was interviewed for/included in a 30 second TV spot for the University of Massachusetts at Lowell (his alma mater!). Included is Adam’s bio at UML’s website.

Adam gets a Profile on the UMass Lowell website!

Adam was interviewed for a feature in Mix Magazine’s May 2011 issue. The theme was collaboration, and the title of the article (The Age of the “6 Word Email) is in part derived from a quote of Adam’s!

The story focuses on Adam’s Grammy Award wins, as well as his experience as a Sound Recording Technology student at UMass Lowell. Check it out here.

Adam recently remastered Pearl Jam’s “Vs” and “Vitalogy“, both of which will be released on March 29th, 2011. Amazon.com‘s “Product Description” of “Vs” makes mention of Adam’s remastering! Check it out here.

Adam was recently profiled in Maine the Magazine’s November/December issue. Check it out here.

Here’s a photo of Adam from the article: 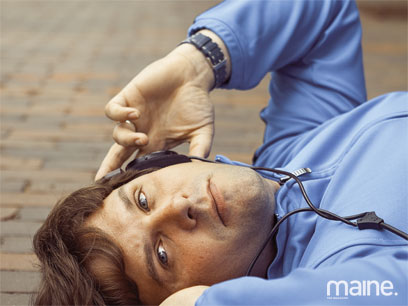 Adam has won another Latin Grammy, this time in the category of Album del Ano/Album of the Year as part of the production team (mastering engineer, of course!) on Juan Luis Guerra’s latest release “A Son de Guerra”!

Congratulations to Juan Luis and all of the musicians and engineers involved in the making of “A Son de Guerra”!!

Adam is nominated for a Latin Grammy! The nominees for the 11th annual Latin Grammys were announced, and Adam Ayan was nominated for his work with Juan Luis Guerra! The nomination is in the Album of the Year/Album del Ano category, for Juan Luis Guerra’s latest release “ASonDeGuerra”. Adam was the mastering engineer on “ASonDeGuerra”, which earns him this nomination as part of the production team.

Tito El Bambino, also a client of Adam’s, is nominated as well in the “Best Tropical Song” category for his single “Ti Pido Perdon”.

Local alt weekly The Portland Phoenix (part of the legendary Boston Phoenix), recently named Adam Ayan among “Portland’s Most Influential”. Apart from being an extremely busy mastering engineer; working with the music industry’s biggest artists and earning Grammy Awards and TEC Awards; Adam is also an active member of his community.

Adam has served on several task forces and committees for the City of Portland, including most recently City Hall’s “Creative Economy Steering Committee”, which among other things has helped the City Of Portland found a new non-profit called the Portland Creative Corporation, whose mission is to help promote and support Portland’s creative economy. Known in the community as a supporter and activist for the Portland music scene, Adam also founded the Portland Music Foundation in 2006. The PMF is a 501c3 non-profit whose mission is to help support, organize, connect, and nurture Portland’s thriving music community. Adam served as the PMF’s de-facto leader and Board President for it’s first 2 and a half years of existence, and now serves as an active member of the PMF’s Board of Directors.

Adam is also part time faculty at the University of Southern Maine’s School of Music, teaching a digital audio course called Topics In Music Technology for the past 8 years. His involvement with USM’s School of Music helps bridge the gap between academic world at USM, the professional music world, and Portland, ME’s music community.

Adam has won his first TEC (Technical Excellence and Creativity) Award! The award is for “Outstanding Creative Achievement” in the category of “Surround Sound Production” for his mastering work on the Foo Fighters DVD/Blu-Ray release “Live At Wembley Stadium”. The 25th Annual TEC Award winners were announced Saturday October 10, 2009 in NYC.

The 10th Annual Latin Grammy Award nominations have been announced! Recent projects for the artists Luis Fonsi and Tito “El Bambino” (mastered by Adam Ayan!) have received 2 Latin Grammy nominations each! Luis Fonsi is nominated in both the prestigious “Cancion Del Ano” (Song Of The Year) and “Grabacione Del Ano” (Record Of The Year) categories for his hit single “Aqui Esto Yo”, from the album “Palabras Del Silencio”. Tito “El Bambino” is nominated in the category of “Mejor Album de Musica Urbana” (Best Urban Music Album) for his latest album “El Patron”; as well as in the category of “Mejor Cancion Tropical” (Best Tropical Song) for the song “El Amor”, the first single off the album “El Patron”.

The Latin Grammy Awards will be held in Las Vegas on November 5th, 2009. Best of luck to the nominees!

Adam is nominated for a TEC (Technical Excellence and Creativity) Award! The nomination is for “Outstanding Creative Achievement” in the category of “Surround Sound Production” for his mastering work on the Foo Fighters DVD/Blu-Ray release “Live At Wembley Stadium”. The 25th Annual TEC Awards are scheduled for Saturday October 10, 2009 in NYC.

Adam was quoted in the Sound Stage A/V, December 2007 article “His Master’s Voice“. Adam chimes in on the art of mixing and mastering.

Adam was quoted in the Mix Magazine, December 2007 article “Critical Listening“. Adam and several other mastering engineers discuss the art of critical listening as it pertains to mastering.

Adam wrote an article published in Mix Magazine, December 2006, on behalf of the NARAS P&E Wing. The article is titled “Notes from the P&E Wing: Labeling Your Masters, More is Better“, and focuses on the need to properly label your mixes and source masters…fun!

Adam was mentioned in a press release for the band Rush, announcing the remasters of 4 of their Atlantic Records releases. Adam of course did the remastering, and was honored to be included in their press release! It was originally published at Rush.com, as well as several other music related publications.

As part-time faculty member at the University of Southern Maine‘s School Of Music, Adam has had the pleasure of teaching the basics of audio and recording to the eager students of his “Topics in Music Technology” class. USM’s website ran a feature on Adam in July 2008 entitled “Master of Possibilities“ , and the USM newspaper the Free Press, also ran an article called “Grammy-Winner and Community Activist is Music Technology Prof“ in March 2008. Adam has now taught “Topics In Music Technology” for 8 years, and hopes he has not drove his students too crazy…

Adam’s alma-mater, the University of Massachusetts at Lowell, issued a press release in February 2008 called “Two Alums Up for Grammys at the Weekend’s Awards Ceremony“, announcing Adam’s recent Grammy nomination, as well as the nomination of fellow alum Mark Donahue. The press release then followed by a news story in the Lowell Sun, “Alumni Get Shot at Grammy Glory” and a feature in the Umass Lowell Magazine.

Adam was featured in a TC Electronics ‘user story’, titled “System 6000: Working With an Icon”.